A creative VFX
and animation studio

recruitment@theoutpost.nl
Careers
Take me back

Flipping an ordinary setting, into something extraordinary. Dutch design brand Fatboy and agency Dept invited us to join in this summerly endeavor. In collaboration with with director/photographer Leon Hendrickx, we jumped on board at an early stage of the concept. The Outpost took on the responsibility for both the shoot production and the post production.

For the visual translation of the style and atmosphere, Leon Hendrickx was inspired by the works of photographer Slim Aarons. Which is classy, colorful and has a hint of stylized perfection. The atmosphere would have a slight retro-feel to it while at the same time create a setting in modern day and age. This is combined with a distinctive symmetry and color palette in a location that mimics a French Riviera-style villa with pool.

The initial request only involved photography, but as we like to challenge perceptions, we broadened the horizon for Dept and Fatboy. The idea needed to be pushed to the next level. Thus a series of stills became a living painting, a new world frozen in time, that every time you watch it reveals more of its details and secrets.

Another challenge we took on was creating a composition that would work not only work for tv but also social media channels. By applying a principle we call “The Golden Square”, we positioned all elements within a square that allows the images to be cropped in any format and still be left with a pleasing composition. 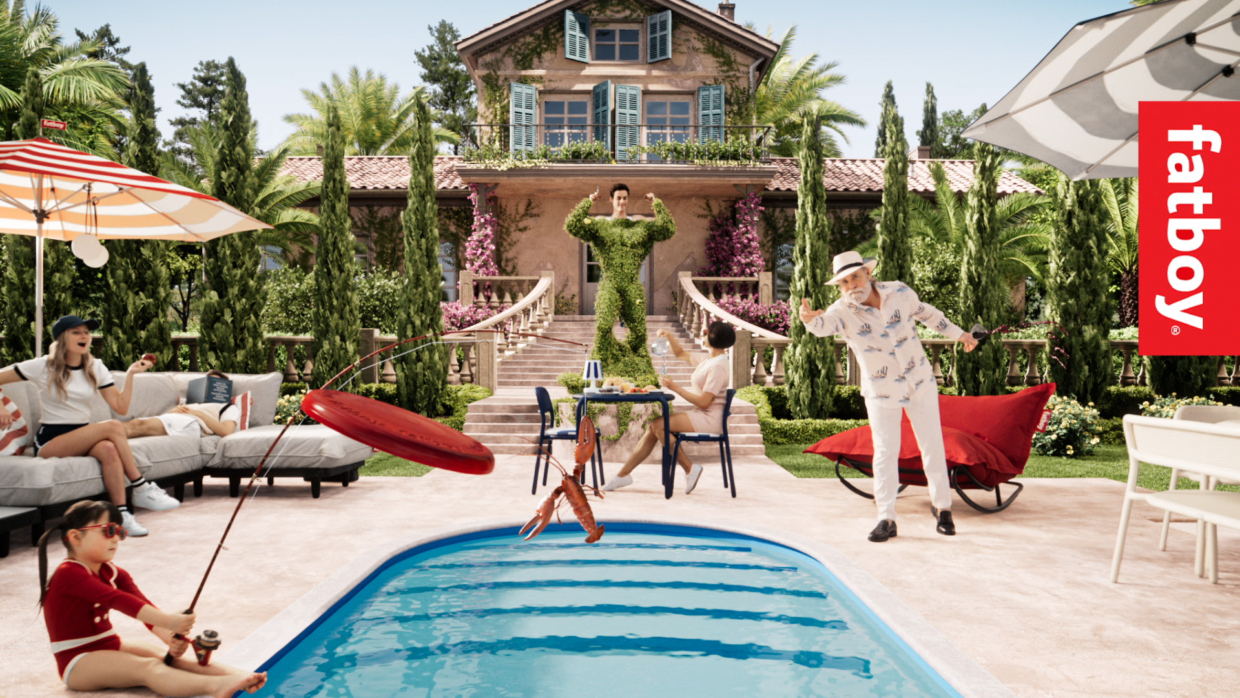 Tableau Vivant with Dolly Out

Together with Director Leon Hendrickx we decided on a style called Tableau Vivant.
Tableau vivant is a static scene, containing several actors and/or subjects that are stationary and silent, carefully posed with props and scenery. This one scene contains many sub stories within it, the longer you look the more you discover.

To bring this photography style to new heights we used a dolly out technique. For those we are unfamiliar, a ‘dolly’ is a wheeled cart that runs on tracks and carries the camera, making the movement very smooth and controlled — Almost as if the camera is floating. In a ‘dolly-out’ shot, the camera moves backwards away from the main subject.

The shot required a backyard setting and included a large pool and house. To create a believable set like this we quickly decided to go full 3D on the environment mixed with the filmed footage of the Fatboy products and actors.

We explored two options. One would be to create a 2,5D setup. This technique meant putting all the characters and props on 2D cards and placing them in 3D space while animating a camera through the 3D scene. The downside of this technique would be the lack of perspective from all the objects themselves and not show of the main products in all their glory

The second option meant a more complex approach, but would result in a much more immersive experience. We first spend numerous hours on the animatic (rough animated setup of the scene) which laid the groundwork for the entire shoot. Luckily we are no strangers to complex and demanding shoots! Since we were dealing with numerous actors in one single shot, we needed a strategy to seamlessly combine multiple takes of all of them. This required us to utilize a Technodoly, a robot camera crane, that can be programmed in advance to replicate the exact same movement over and over again. 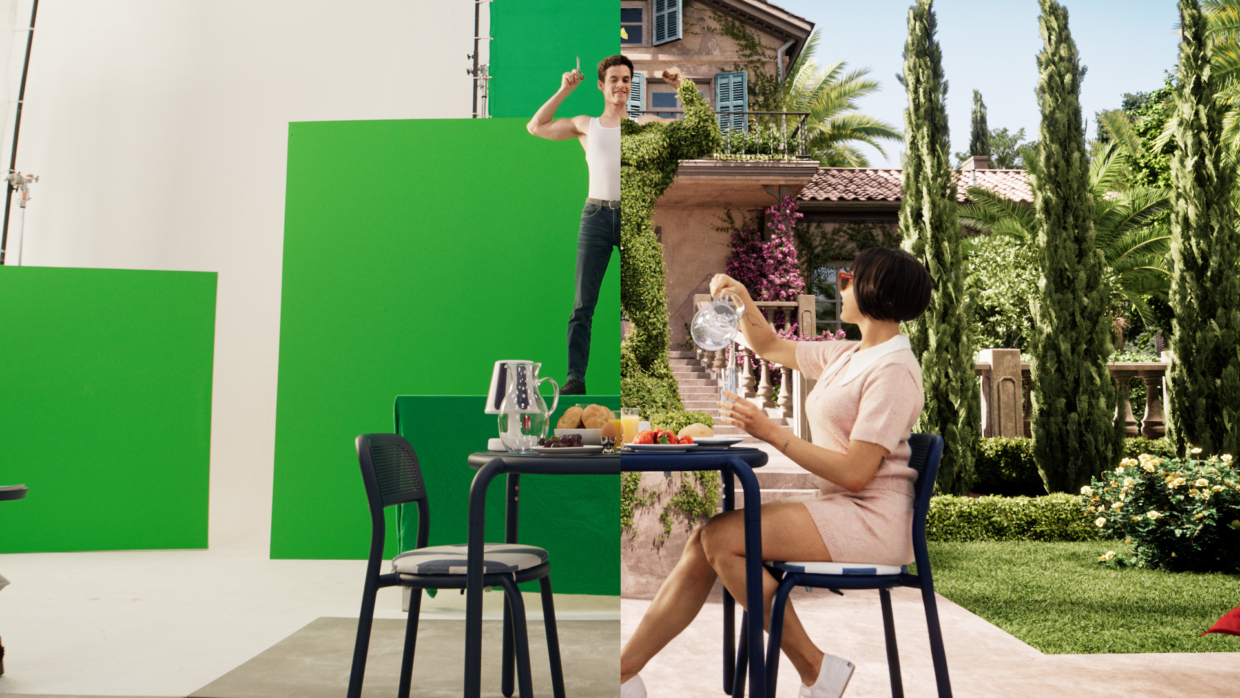 To better communicate the idea to the client and to prepare for the shoot, an animatic/previsualization was made. A rough version of the set was blocked out and we started testing different camera setups and movements. This gave us a clear picture of what needed to placed where and how fast the camera should move. It was quite a puzzle to fit all the products and actors in the golden square and yet keep it playful and elegant!

The end result is a very basic looking 3D version of the film, complete with blueprints and measurements of the set. Now let’s do if for real! 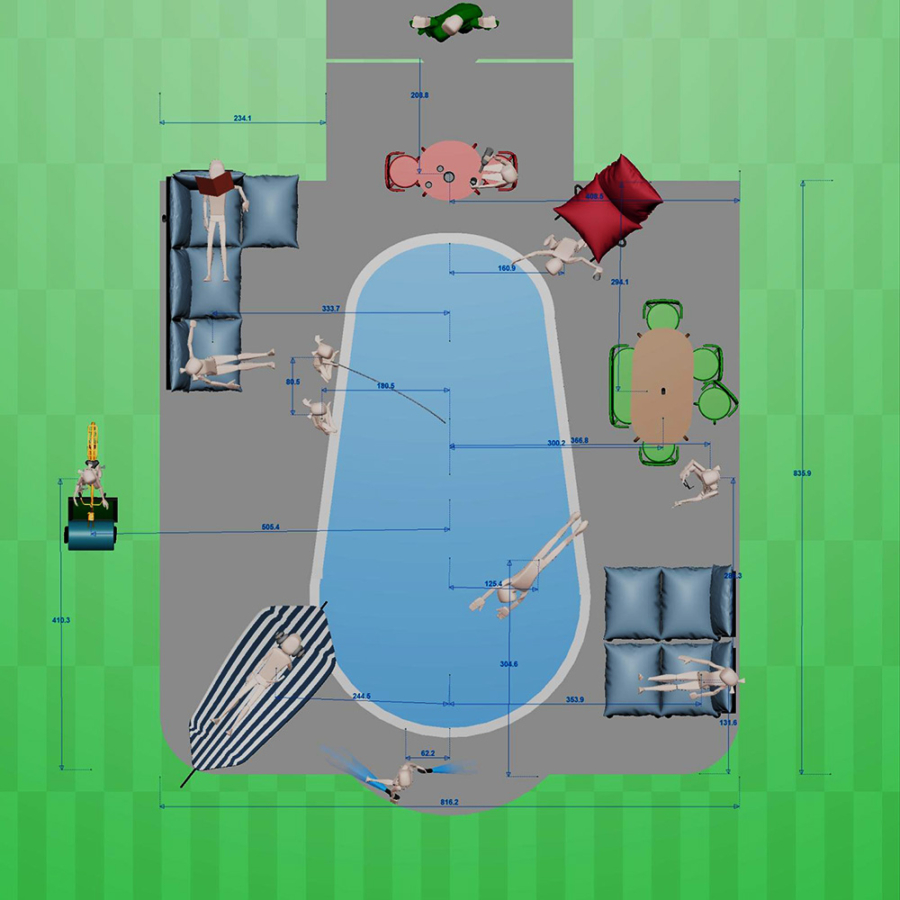 While one part of the team was working on the animatic/previsualization another started building styleframes to get a sense for what our world was going to look like. The goal was to create a playful, yet symmetrical composition for which both Slim Aarons and Wes Anderson-style were a huge inspiration.

The styleframes went through numerous iterations, with every version bringing us closer to the grand vision. Every little detail was meticulously crafted, from the length of the grass to the shape of the pool and the architecture of the villa. In collaboration with the director, Dept Agency and the Fatboy team we made sure that all the products received to attention they deserve and that the Fatboy summer vibe was nailed! 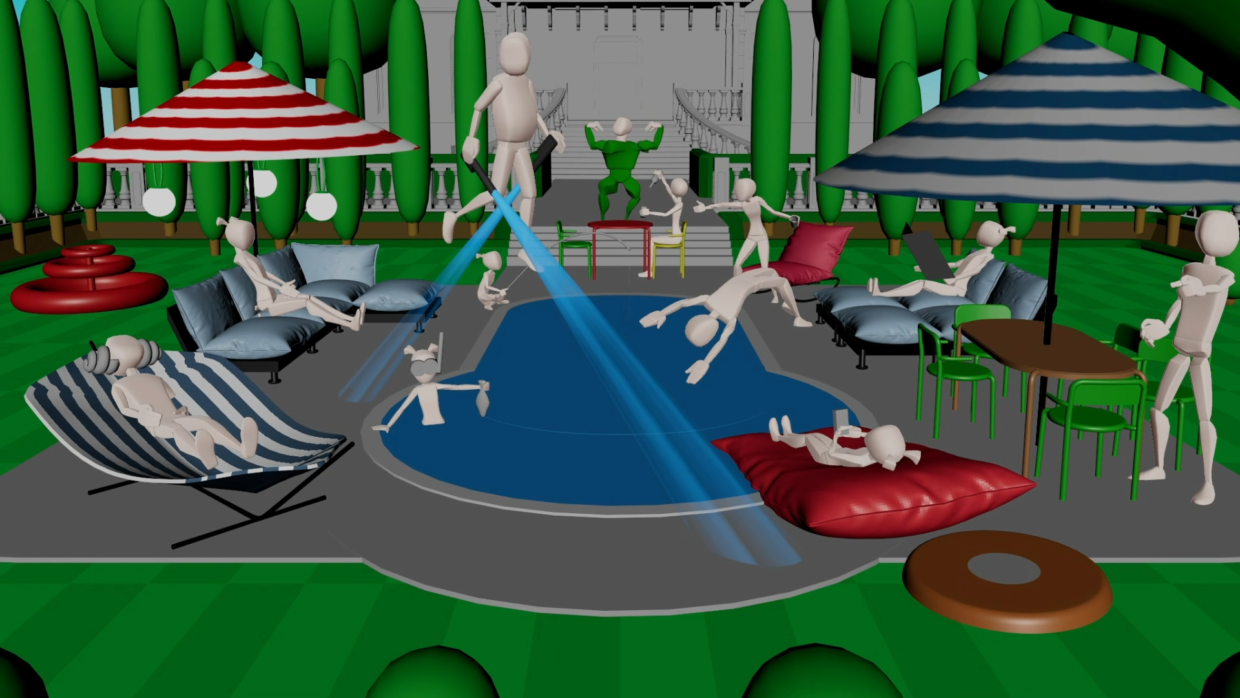 The one and only Technodoly!

Without this amazing piece of technology, this concept would not have held up! The programmable camera crane allowed us to shoot the 9 different takes in exactly the same movement. This allowed us to combine the different plates to make it look like a single take. 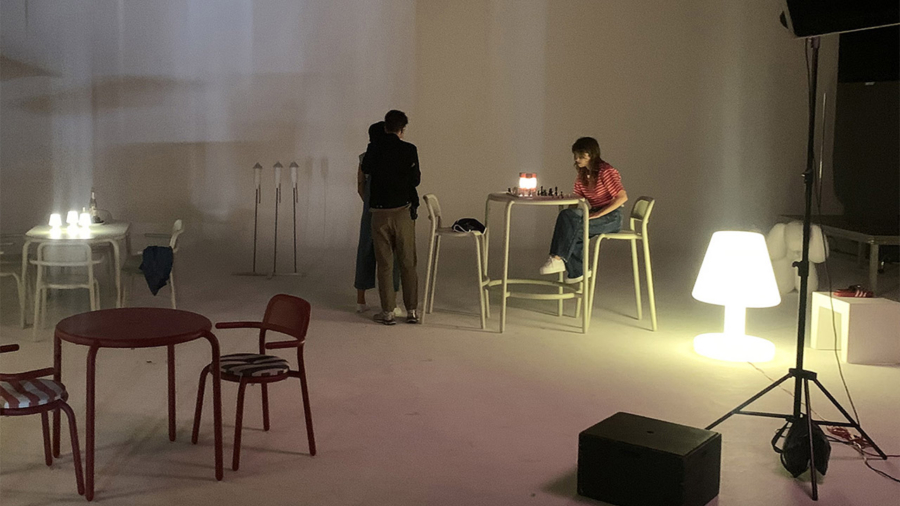 Simultaneously to the film shoot the product photography shoot took place. In the animatic phase we also prepared the exact camera position and positioning of all the products for these stills. The CG backdrop in which the photographed elements would be placed was also prepared. This provided lighting reference for the photographer making the integration easy and seamless.

To keep the whole shoot efficient, our actors could move from the film set to the photography set and vice versa. The deliverables from the photography consist of 3 different plates at 16K(!!) which is suitable for a print campaign 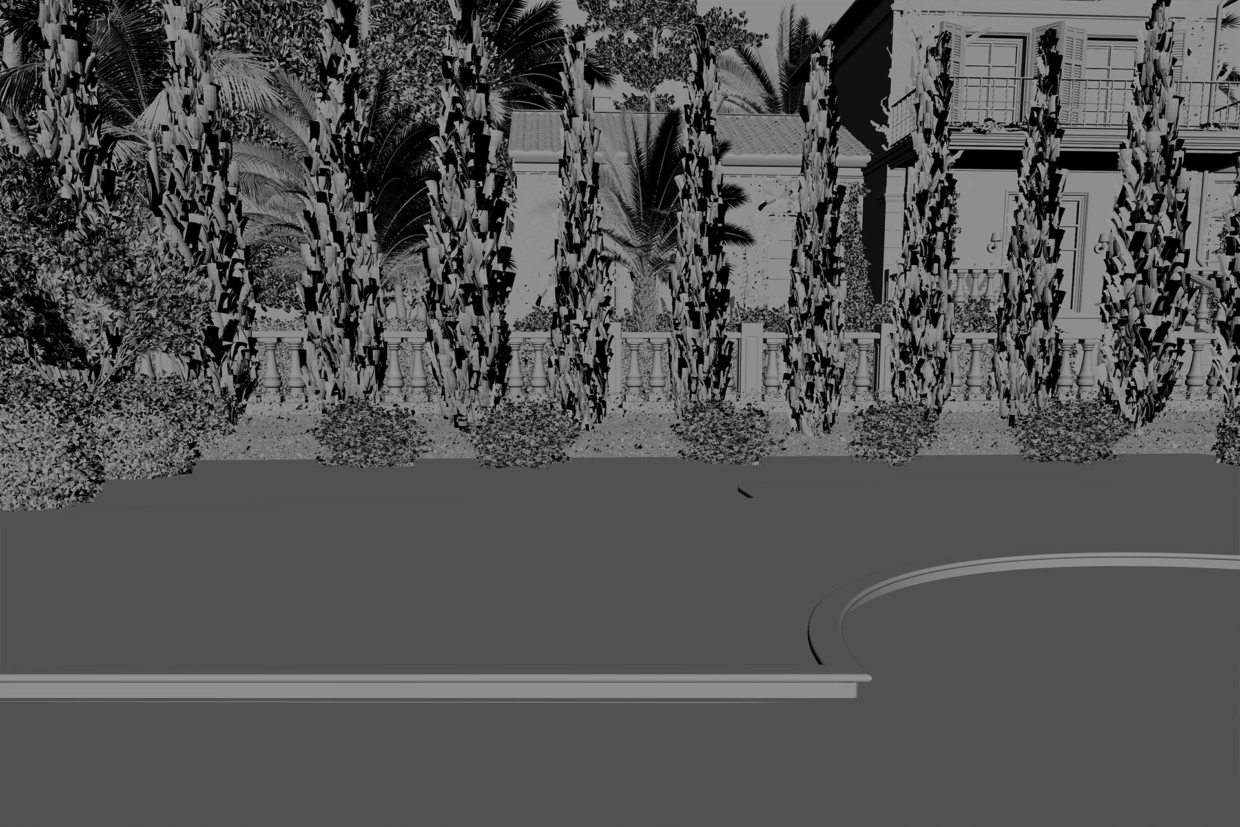 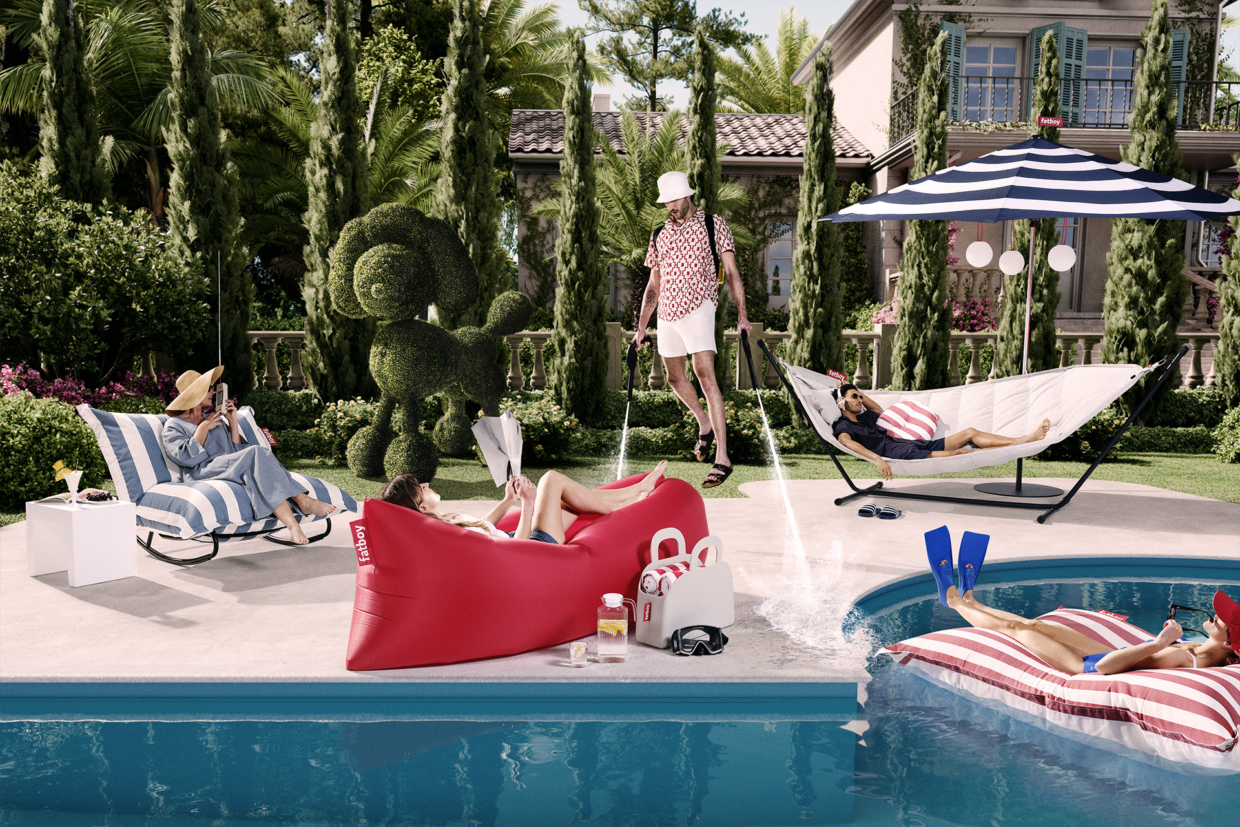 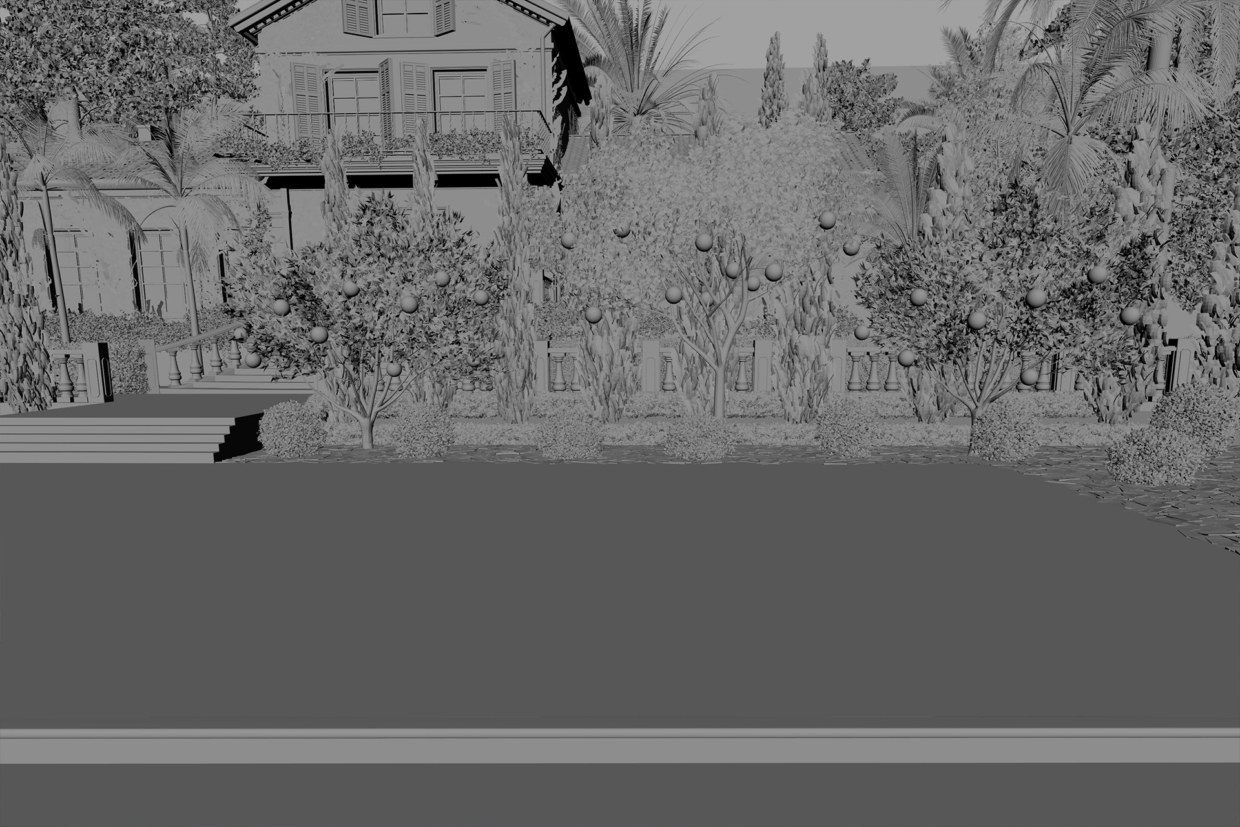 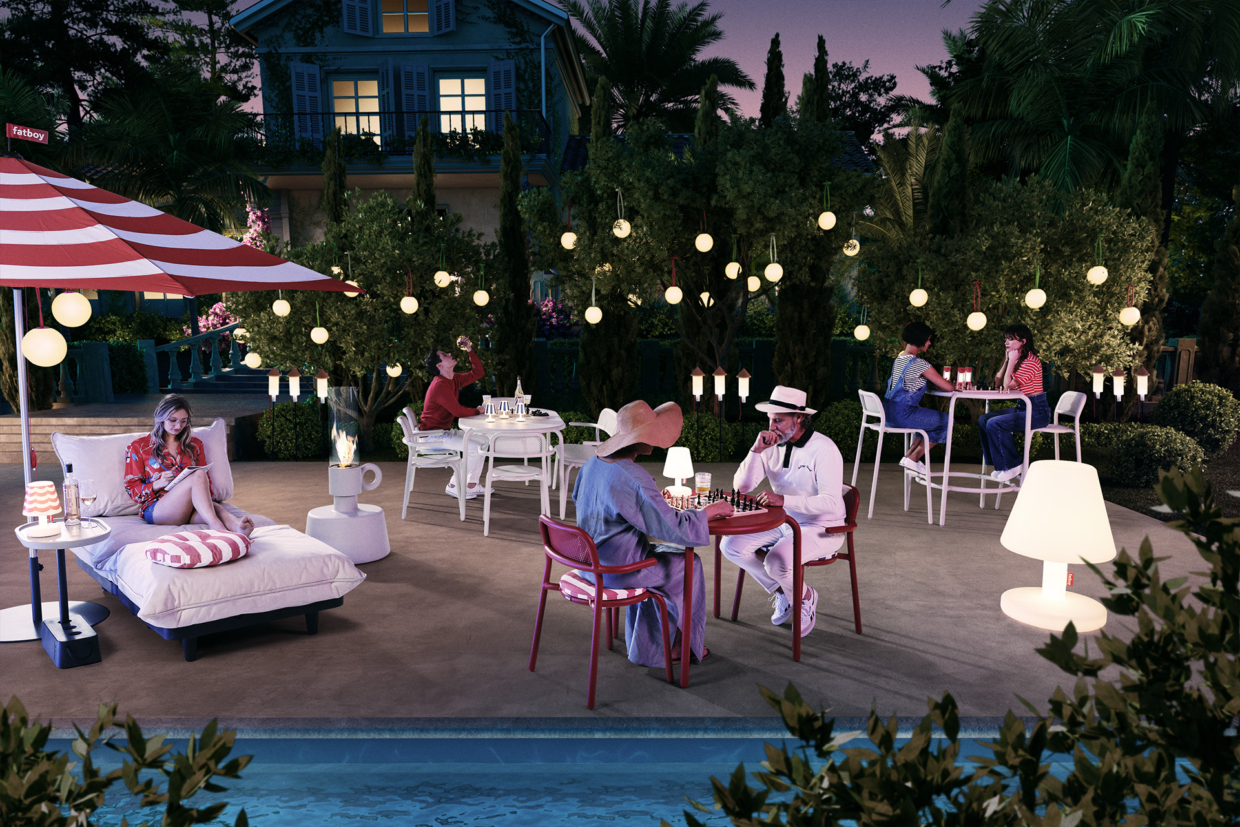 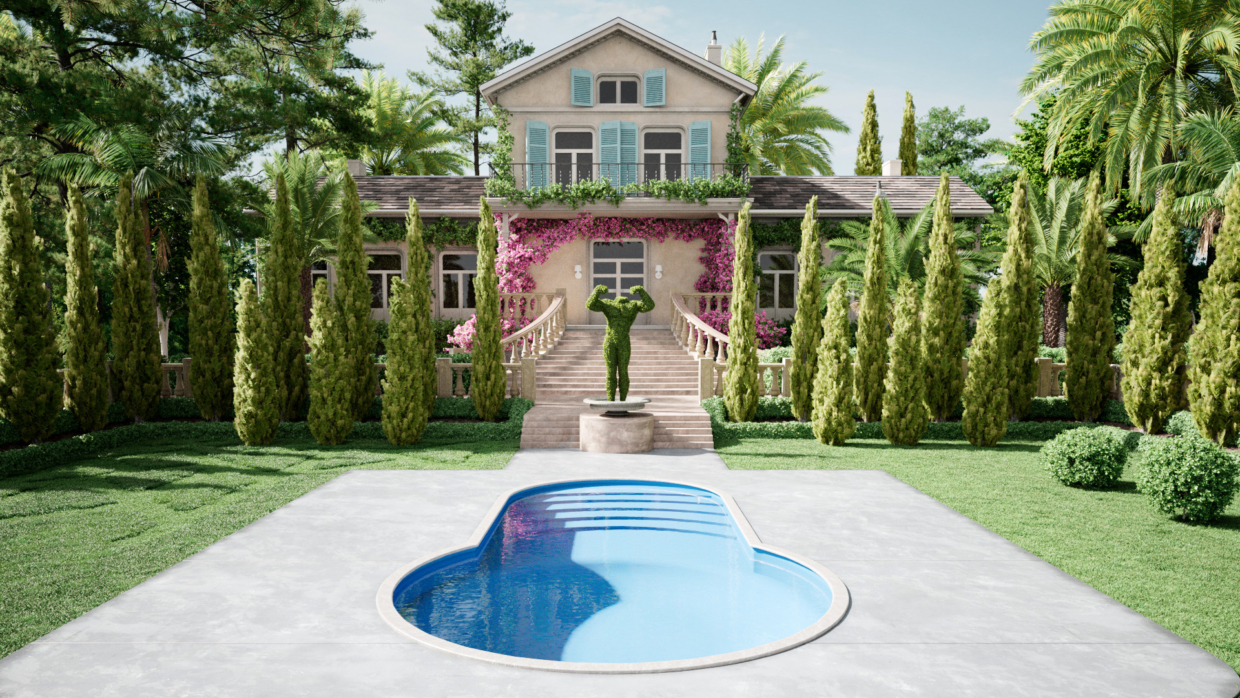 We love to break our work down a little for you. Check out the following video to see how it was made. 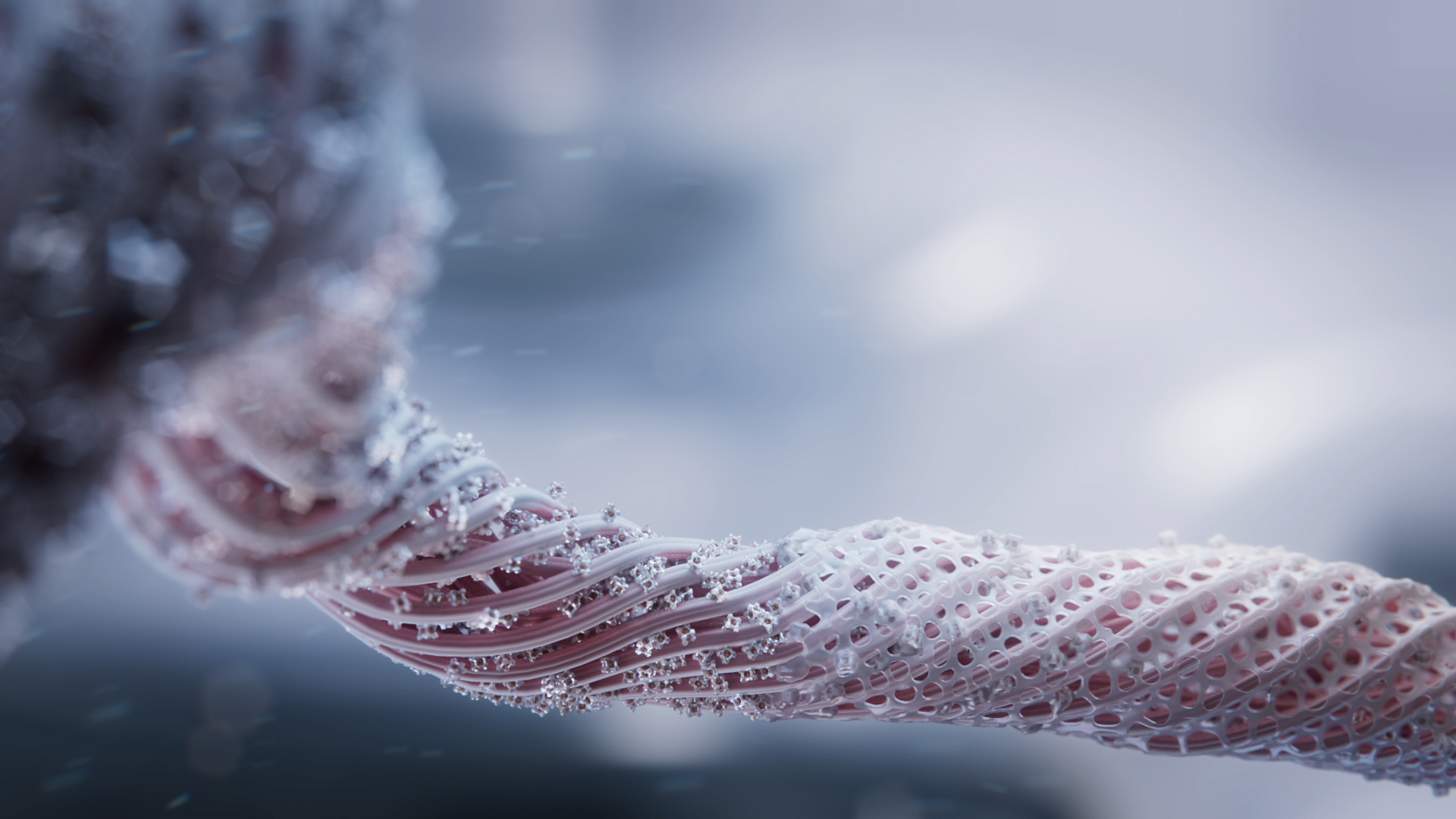 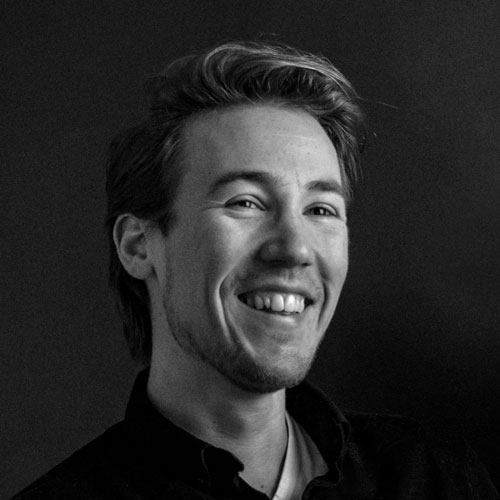 We’re always available for a chat and a cup of coffee. Get in touch with Rick about: